Preparations for the Construction of Bailey Bridge

The Bailey bridge enterprise designs the temporary Bailey bridge solution to be built this time according to the preliminary measurement data and the surrounding environment. The Bailey bridge needs to be built at the exit of a diversion tunnel, and there is enough space on the bank to install the Bailey frame. Because one side of the riverbank is shallow, and there is a height difference with the other side of the riverbank, it is necessary to build a concrete pier on one side. The Bailey bridge length is 22 meters. It uses a compact 100 Bailey bridge with a double-row single-layer reinforced single-lane structure design. The net width of the bridge deck is 3 meters, the load is 20 tons, and the theoretical weight of the steel bridge is about 22.5 tons.

1. Determination of the Bailey bridge location

According to the requirements of the Bailey bridge design drawings, the site was measured to determine the positions of the piers on both sides of the Bailey Bridge. At this time, a 2m3 hydraulic backhoe is needed to clean the roadbed. The excavation size for bridge pier construction is 5m×3m.

2. How to pour the piers of Bailey bridge

At the position of processed bridge piers, a 1.5m×1m M7.5 mortar masonry foundation was first made, and then C30 concrete was used for pouring. When the concrete reaches 80% of the design strength, the Bailey bridge can be erected.

3. Start to assemble the Bailey bridge

4. How to install Bailey bridge？

When the bridge construction site has a suitable site for assembling Bailey pieces, or there is no other special bad terrain, the cantilever push-out method can be used for the installation of the Bailey bridge. When installing the Bailey bridge in a narrow site or a special terrain, you can consider using the wire rope sling method to install it or design an appropriate installation method according to the actual situation.

The installation of the Bailey bridge this time adopts the cantilever push-out method. Firstly, rollers are installed on both banks of the river, and the bridge trusses and connecting beams are installed on the rollers pushed out of the bank. Then use the loader located on the other side of the river for towing. Each time a group of Bailey panels is installed, it advances a certain distance. Until the entire bridge body is pushed to the opposite bank.

After the bridge body reaches the opposite bank, hydraulic jacks are used to place the Bailey structure at the bridgehead into the bridge seat. After the angle adjustment of the measuring instrument, it finally falls into a precise position.

The deck structure of Bailey Bridge is laid with standard parts of cross beams and longitudinal beams. Wooden or steel bridge decks can be selected. The bridge decks used in this project are made of special steel panels.

6. Construction of roads at both ends of the bridge

Backfill the road connecting section of the original construction road and the bridge with gravel. After the backfill is completed, a hydraulic backhoe is used to roll the road surface. 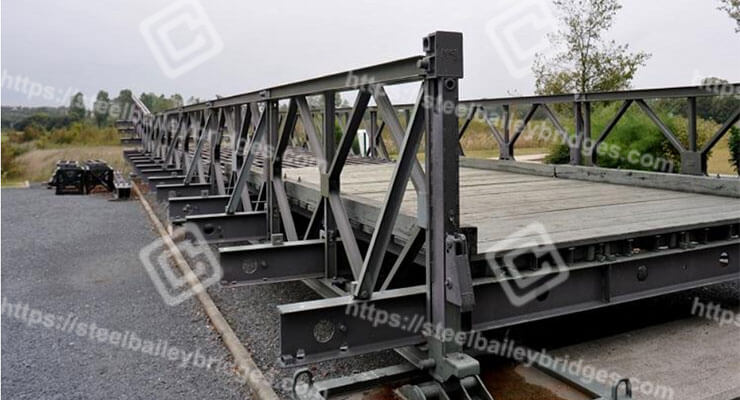 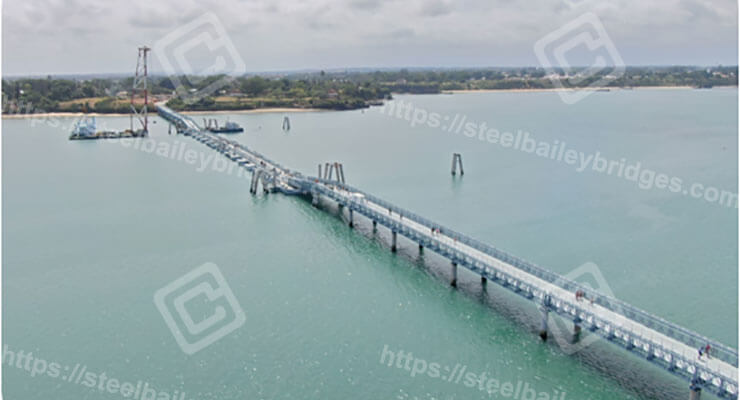